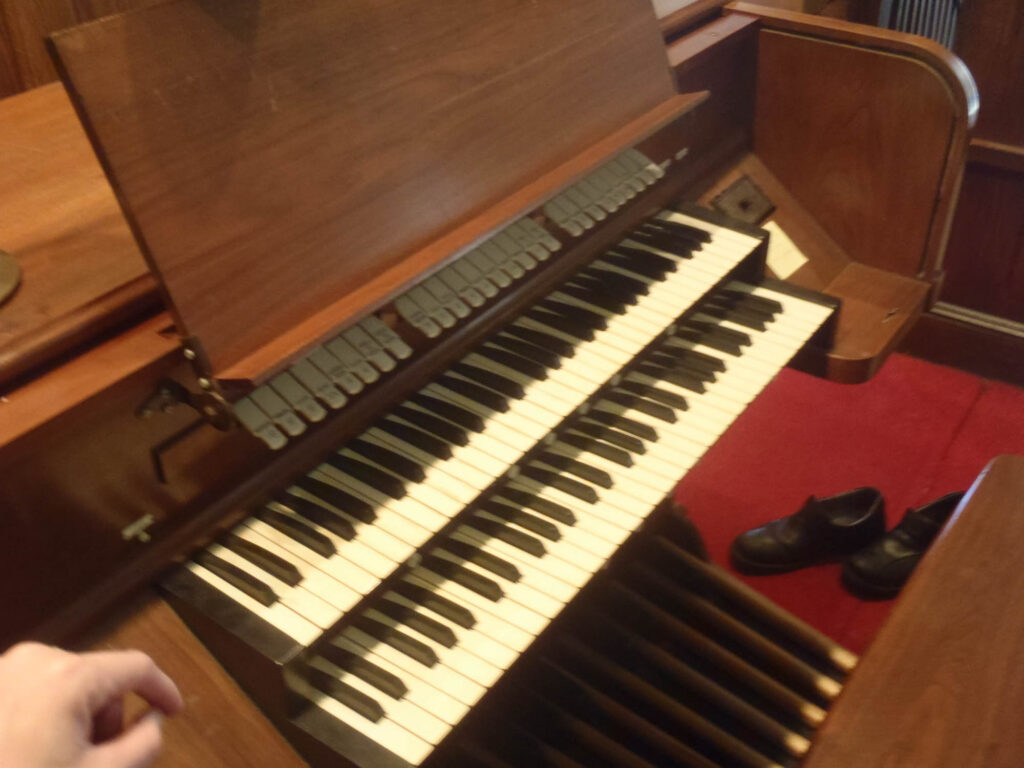 History of the Organ

From the 125th anniversary booklet: “The organ loft has been through many changes, but records are vague as to how many organs and renovations occurred. One parishioner relates that Fr. Bloomer, on one of his trips abroad, became acquainted with Andrew Carnegie, who donated a substantial sum toward an organ for our church.”

The Organ Historical Society database lists a C. E. Morey Opus 278 installed at Ss. Peter and Paul in 1910.  It was a two manual instrument with slider chests and mechanical key action. That instrument is no longer extant.  Clarence E. Morey (March 31, 1872–June 20 1935) was the owner of this company, based in Utica New York.

Mr. Peter O’Hearn of the Carey Organ Company (Troy, NY), is the curator of the present instrument, and has been since its installation in 1978.  Peter shares additional history.  “…..I needed to dig around in our old files and ask Paul Carey and Lynn Swank what they remembered. From what I’ve been able to gather, there was a rebuild of the Morey organ sometime in the 40’s by The Buhl Organ Co of Utica  ( 1926 – 1940’s ).   It seems they retained most of the pipework , toeboards and racking , then built new chestwork and windsystem and purchased a ” supply house ” ( Klann) console.  I’m not at all sure about the time line for the blowers , but I would assume that one was installed while the instrument was still a tracker , then a good chance that another was installed with the rebuild by Buhl , and finally the present blower ( Meidinger ) was installed in the attic sometime before the Carey rebuild. In the present organ we retained all the pipework ( and added a II Mixture , a Trumpet , and the Larigot ) , the console from the Buhl rebuild was retained, internally rebuilt and externally refinished . The present blower was moved from the attic and integrated into the new reservoir base. We designed and built all new chestwork , wind system , chassis and Swell box and the new case front/ facade. Sorry I don’t have much in the way of definitive dates for the Morey/Buhl time , apparently Carey Organ Co. had a very short history with the church before we did the rebuild project.”

Dr. Eric Stroud adds: “The great 8′ dulciana is the softest voice on the instrument. In 2011, I asked Peter O’Hearn to open up the 16′ pedal bourdon to provide more bass, being careful to control the sounding of the fifths. The gedeckts remain bright and chiffy. The mixture II is fiery, almost like a reed. Some of the great is under expression with the swell, which is an interesting resource. The blower is compact, quiet, and fully contained within the pipe room, in contrast to the two very large ‘turbines’ that remain in the church basement. Air from these vintage blowers was ducted from the basement to the great attic, and then returned to the previous installation’s windchests. The abandoned main duct remains to this day as a likely conduit for the resident bats! For the first Christmas recital in 2011, I added a homemade Cymbelstern to the organ, comprised of 5 telephone bells. In the fall of 2011, I met with Mr. Mark Austin, curator of many of the Rochester area organs, and salvaged a full rank of metal 16’ pedal Violone pipes from an Episcopal church that was upgrading their organ. It is my plan to add this rank to the existing organ to expand the pedal bass ensemble. In the interim, I enjoy ending large organ works with full pedal organ with pedal couplers and a simultaneous fifth or octave in the pedal!” 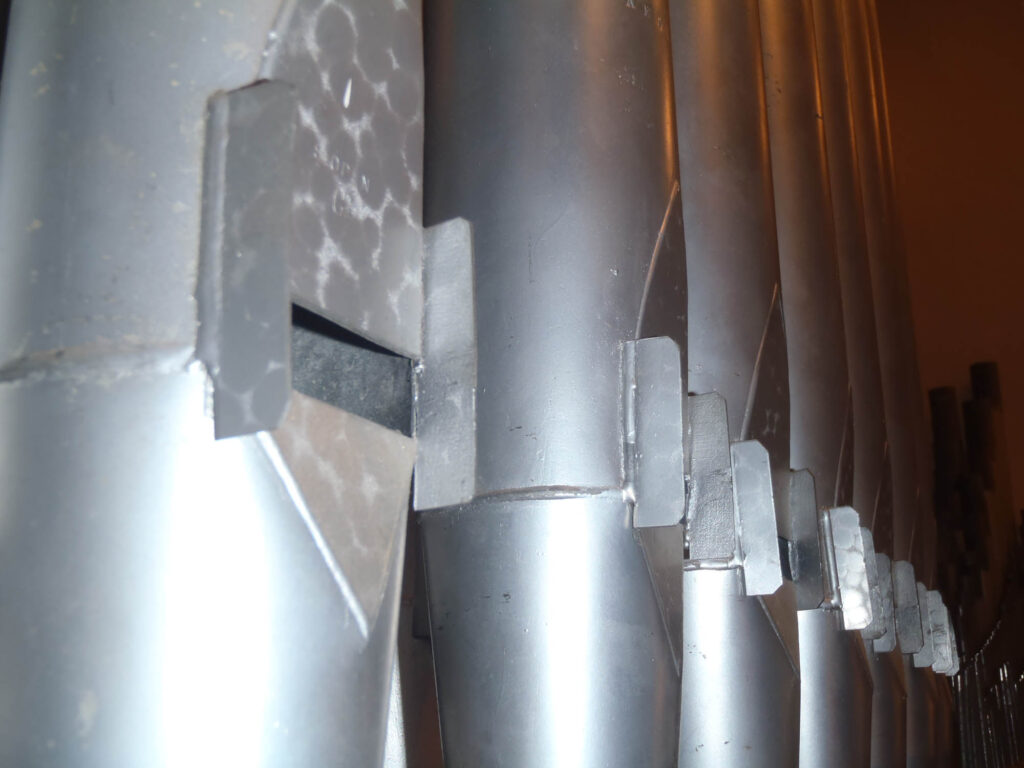 Carol (McEwan) Cechnicki served as organist at the former Sts. Peter & Paul’s Church  from 1976 until 2010, as well as St. Patrick’s Church in St. Johnsville (2004-2010) and St. James Church in Fort Plain (2003-2010). Carol has served in several area churches over the years and continues to play regularly for funerals and weddings throughout the area. She is currently the organist at Our Lady of Hope Roman Catholic Church in Fort Plain (2010-present) and the Reformed Church in Canajoharie (1998-present).  She also plays the piano with the Second Time Around Big Band. Carol and her husband Joe were married at Sts. Peter & Paul in 1976 and have two grown children.  Joe is an ordained permanent deacon in the Catholic Church and currently serves as Parish Life Coordinator for the Church of St. Adalbert in Schenectady.

Norma (Timerman) Bowley started piano at age 4 with Mrs. Ethel Conrad, then took organ lessons from Mrs. Nancy Corlett, Mrs. Elinor Farnum and others.  In her teenage years, she began to accompany school choirs and play for church services and she never stopped!  Norma currently plays for Faith, Hope and Love Christian Fellowship, Good Shepherd Episcopal Church, the eight choirs of the Canajoharie and Fort Plain Central Schools, the Fort Plain-Canajoharie Drama Club summer plays, weddings, and other various events.  She has taught piano and organ for 25 years.  Norma and her husband David live in Palatine Bridge with their children Joanna, Melissa, and Elijah and David’s mother, Dorcas.

From an email received from Virginia Hoban-Pender,  August 27, 2012: 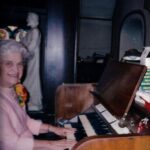 “I think it is wonderful what you are doing with the church in Canajoharie.  My mother, Virginia Hoban, would certainly approve.  She was organist there from 1942 until 1995 and, in fact, I believe the last to be buried from the church on Feb 3, 2010.  I have attached some pictures I thought you might find interesting.

The first is her at the organ, the second is a confirmation in, I believe, 1959 and the third is a May crowing of the Virgin Mary in 1950.  They show the original appearance of the church.

A Little About Us

The Upstate Chapel is a premier concert and meeting space open to the public. It is a historic, 1863 limestone church situated in the beautiful Mohawk River village of Canajoharie. For musicians, the acoustics of the interior are wonderful for performance and recordings, and a real pipe organ, concert grand piano, and other keyboard instruments are available.  The Upstate Chapel is also home to the congregation of New Beginnings Bible Church who meet weekly and welcome all.